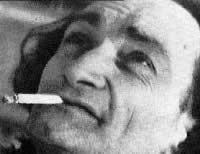 Artaud, Antonin (1896-1948), French poet, dramatist, and actor, whose theories and work influenced the development of experimental theater. He was born and educated in Marseille, France. Artaud went to Paris in 1920 and became a stage and screen performer. In 1927 he cofounded the Théâtre Alfred Jarry, where he produced his own play The Cenci (1935), an illustration of his concept of the theatre of cruelty. He used this term to define a new theater that minimized the spoken word and relied instead on a combination of physical movement and gesture, nonspecific sounds, and the elimination of conventional spatial arrangements and sets. Their senses thus violated, spectators would be forced to confront the inner, primal self, stripped of its civilized veneer. Hindered by lifelong physical and mental illness, Artaud was unable to implement his theories. His book The Theatre and Its Double (1938; translated 1958) describes theatrical modes that later, however, became identifying traits of the ensemble theater movement, the theater of the absurd, and the environmental and ritual theater.