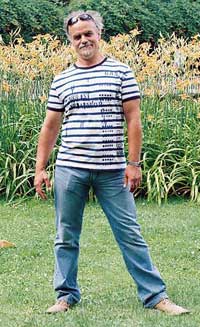 Angel Sitnovski – Boys (b. 4.10.1951, Skopje, Macedonia) graduated Architecture in Skopje, completed post-graduate studies in Belgrade in 1983.
He has worked in Pelagonija Construction as operative engineer, then in Engineering Invest as architect. Since 1993 he works in his privately owned engineering company “Sitnovski.”
In 1978-1980 he has studied Visual Arts at the Pedagogy Academy.
In free time paints in oil, aquarelle and pastel. Every day, except in extreme conditions, he goes to Vodno and other close mountains, hiking or biking.
He often travels throughout Europe and Middle East and makes photographs of landscapes and architecture.
He was an associate in the magazines “House” and “My Home,” member of Macedonian Architects’ Association, President of the last Architects’ Biennale and until recently Board member of the Association Presidency.
Music collector since 1962. One of the first owners of the Beach Boys record – hence the nickname Boys. Proud owner of some 1.000 singles and some 20.000 LPs and CDs.
In early 1990’s worked as show host at Sky Radio, and five years (until mid 2007) at Radio Ravel, hosting the “Rock Story” show.