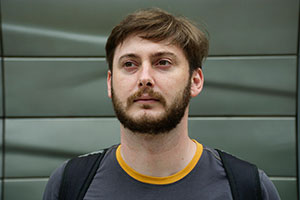 Angel Miov is visual artist that works in different media like installation, video art, video performance, painting and photography. In his work he explores the ideas such as the identity of the artist versus the identity of the artwork.
Born in Gevgelija, Macedonia in 1982. Graduated in 2006, at the Faculty of Fine Arts in Skopje, painting department, with course of conservation and restoration.
In 2011 finishes postgraduate studies at the Faculty of Fine Arts in Skopje.
From 2007 is member of the Society of Fine Artists of Macedonia. In 2009 he is one of the founders of the artist group and the artistic space Art I.N.S.T.I.T.U.T. in Skopje. He has participated in many Visual Art projects in Macedonia and abroad.
Since December 2012 works as an Assistant Professor (Nude and Drawing) at the Faculty of Fine Arts, University “Ss Cyril and Methodius” , Skopje, Macedonia.
www.angelmiov.com