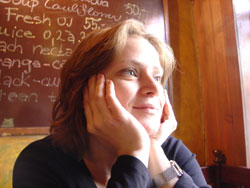 Andrea Pisac was born in Kutina, Croatia, on 26th of February 1975. She was drawn to writing from an early age, winning an international short story competition at the age of sixteen, published in Current magazine. After graduating in Croatian and English (language and literature) from the University of Zagreb, her work appeared in the literary magazines Literary Review, Tide, Libra/Libera, Tema and Zarez.
She has travelled widely in Europe, contributing to various writing circles on the continent. Amongst the countries she counts as familiar are Spain, Great Britain, Italy, the Czech Republic and Hungary.
Always attuned to new developments in literary presentation, she has contributed both to Internet magazines and pioneered the first Croatian hypertext Mixal, Wenders and I.
In 2001, her collection of short stories, Absence, was published in Croatia, winning a young authors’ competition in the process.
After reading theory of literature as a postgraduate course at the University of Zagreb, she won the British Chevening scholarship to study MA in Central and South-East European Studies at UCL in London, UK. Her work in English appears in literary journal Slovo, published by SSEES (School of Slavonic and East European Studies, University of London). She is currently doing a PhD in visual anthropology at Goldsmiths College, London, as well as working at the English PEN as a co-ordinator for the project Writers in Translation.