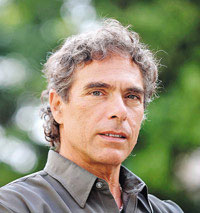 Amir Or, born in Tel Aviv in 1956, is the author of ten volumes of poetry. His latest books in Hebrew are The Museum of Time (2007) Heart Beast (2010) and Prophecy of the Madman (2012). His poems, translated into more than forty languages, have appeared in anthologies, poetry journals, as well as in twelve books in Europe and the U.S. Among them are Poem and Day (both published by Dedalus, U.K., in 2004, and 2006, respectively); Plates from the Museum of Time (ArtAark, U.S., 2009); and the Spanish-English Miracle/The Hours (Urpi Editores, U.S., 2011).
Or is the recipient of Israeli and international poetry awards, including the Bernstein Prize, the Fulbright Award for Writers, the Levi Eshkol Prime Minister’s Poetry Prize, and the Oeneumi literary prize of the Tetovo Poetry Festival (2010). He was also awarded several poetry fellowships, among them fellowships from Iowa University; the Centre of Jewish-Hebrew Studies at the University of Oxford; the Literarische Colloquium, Berlin; the Heinrich Böll Foundation, Ireland; and from the Hawthornden Castle, Scotland.

He is recipient of the Golden Wreath for 2020, Struga

Or translated into Hebrew eight prose and poetry books, including The Gospel of Thomas; Stories from the Mahabharata; and Limb Loosening Desire, an anthology of erotic Greek poetry. For his translations from ancient Greek he was awarded the Culture Minister Prize.
Or has studied Philosophy and Comparative Religion at The Hebrew University in Jerusalem, where he later lectured on Ancient Greek Religion. He has taught poetry and gave creative writing workshops at Helicon Poetry School, as well as at universities in Israel, Japan, the U.S., and Europe. He has published numerous essays on poetry, classic studies, and comparative religion.
In 1990 Or co-founded Helicon Poetry Society and later on served as Helicon’s Chief Editor and Artistic Director. He initiated and developed its various projects, including Helicon’s poetry journal and its series of poetry books; the Sha’ar” International Poetry Festival; and the Helicon Hebrew-Arabic Poetry School.
Currently, Or is director of the Katuv courses of creative writing and teachers training at the Kibbutzim Seminar and serves as editor of the Katuv poetry books series. He is national editor of Atlas international poetry magazine, and as a national coordinator for the U.N. sponsored UPC venture, “Poets for Peace.” He is a founding member of the EACWP (European Association of Creative Writing Programs) of the international Circle of Poets and of the WPM (World Poetry Movement).

Amir Or is a member Blesok’s International Editorial Board.