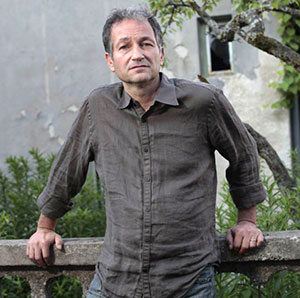 Aleš Debeljak (1961 – 2016) graduated in comparative literature from the University of Ljubljana and received his Ph.D. In Social Thought from Maxwell School of Citizenship and Public Affairs, Syracuse University, New York. He was a Senior Fulbright fellow at the University of California-Berkeley, a research fellow of the Institute of Advanced Study-Collegium Budapest, a writing fellow at Civitella Ranieri Center and a writing fellow of Bogliasco Liguria Study Center for the Arts and Humanities. In 2006/7, he was a Roberta Buffett Professor of International Studies at Northwestern University, Chicago. Debeljak published 14 books of cultural criticism and 8 books of poems in his native Slovenian. His books of poems in English include Without Anesthesia: New and Selected Poems (2010), Dictionary of Silence (1999), The City and the Child (1999), and Anxious Moments (1994). His books of cultural criticism in English include The Hidden Handshake: National Identity and Europe in a Post-Communist World (2004), Reluctant Modernity: The Institution of Art and its Historical Forms (1998), Twilight of the Idols: Recollections of a Lost Yugoslavia (1994), and a comprehensive anthology The Imagination of Terra Incognita: Slovenian Writing 1945-1995 (1997) which he edited. A translator of selected poems by John Ashbery and a book on sociology of knowledge, he edited an anthology of American meta-fiction and an anthology of contemporary Slovenian poetry in English translation. He won several awards, including the Readers’ Choice Award for the best essay of the decade in a magazine World Literature Today, Slovenian National Book Award, Miriam Lindberg Poetry for Peace Prize (Tel Aviv) and Chiqyu Poetry Prize (Tokio), and was named Ambassador of Science of the Republic of Slovenia. His books have appeared in English, Japanese, German, French, Croatian, Serbian, Macedonian, Polish, Lithuanian, Romanian, Albanian, Finish, Hungarian, Czech, Slovak, Spanish, Catalan, and Italian translation. Founding member of the cultural magazine, Sarajevo Notebooks, and advisory editor of American literary journal Verse, contributing editor of scholarly journal, Cultural Sociology, and www.fastcapitalism.com, he is a recurring visiting professor at the graduate school, College d’Europe, Natolin-Warsaw, teaches cultural studies at the University of Ljubljana, and is a member of European Council on Foreign Relations (London-Berlin-Paris-Madrid-Sofia). He and his American wife, a writer Erica Johnson Debeljak, have three children and make their home in Ljubljana.