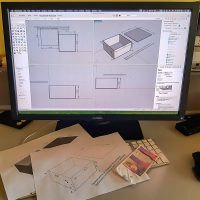 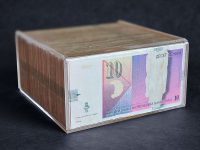 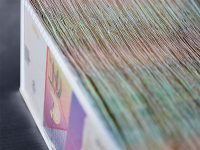 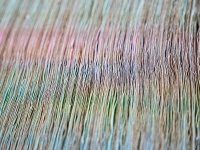 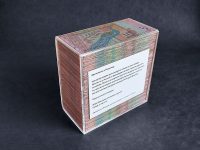 What and to Whom? A Private Gesture that Becomes Public

The object with a descriptive title “Dear Jehona and Vladimir, This Box Contains 5,000 Denars”, made especially as a wedding gift for the author of this text and his wife is a “box containing 5,000 denars in denominations of ten denars”. But, as can be expected from artists like Dana and Denis (OPA / Obsessive Possessive Aggression), having in mind their previous artistic work, even this situation, which is part of the marking of a special moment in private relations, is not left without the necessary challenge that they positioned at the very point of intersection of the comical and the serious. As stated in the short text/dedication/guide that is inserted on the underside of the object, the banknotes “on May 15, 2018 cease to be a legal means of payment”, taking advantage of the moment of replacement of the present books, with new polymer banknotes, they not only studied the process but also distinguished one of the two conditions in order to emphasize the moment of urgency.[11]

However, Jehona and I almost without thinking decided to keep the box intact, saving the “devalued” banknotes.[12] But this is neither because of the “aesthetic/collecting aspect of this work”, nor was there a dilemma to replace it because of its potential “utilitarian function”, but perhaps for the most important aspect – that it contains the dilemma, the challenge, the condition based on seriously thinking and estimating what, when, where, how and to whom this gift is given – as an ordinary object that has undergone the necessary creative transformation/transfiguration into an active element/instigator of discussing open questions about the role of art today, the most uncertain and most complex period for reflection since the modern concept of art and the political as a regulator of the private and the public.

The Object Moved/Displaced: Who Cares if It Is a Work of Art, if It Is Important?

What is the difference between these banknotes and all the other that will be saved/kept in the collections of numerous notaphilist collections, as well as all those that appear on numerous auction sites online and antique shops offline? What is their place and what connection does this gesture make? What does this act based on one crucial decision, its realization and announcement open up in the field of interpretation?

And as in the art collector’s world usually the works get their identities according to the artists’ names, treated as some kind of magical remnant, a materialization of creative thought and fervor, archaic concepts that do not accidentally seem contemporary to the post-artistic, counter-consumerist epoch, this “OPA” work, paradoxically found its place among the other OPA’s works in our modest collection – an atypical anti-collection that is a permanent reminder of the artistic process, the context in which the numerous issues and dilemmas that are common in our relations are created.[13]

11. Although banknotes cease to be a payment instrument, they can be exchanged in one of the commercial banks until May 15, 2019.

12. Not only that we would not replace/exchange the object/gesture/gift/provocation and its value for 5,000 denars, but as I already said in a private correspondence, “we would not change it for two such vacuum cleaners” (with a picture of Jeff Koons, New Shelton Wet/Dry Doubledecker, 1981, MoMA).