Home/Reviews, Gallery, Blesok no. 133 - 135/Interview with the architect Mimoza Tomić

D:        What was the experience of working with such famous names? You were 36 years old, the experiences you gained then have certainly left a mark on your future work and your attitude. To be person of principle, professional, to respect the profession and colleagues, to be collegial.

M:        Our profession requires a lot of discussion and conflicting opinions can lead to a positive result. The Poles have taught us great professional respect. It was an honor to get in touch with such experts, all that cooperation was respected by the politicians as well and after each phase we had professional cocktail meetings where I had the opportunity to personally exchange opinions with international experts and professionals in various fields, and our Institute of Urban Planning of the City of Skopje was a respected insttution. The solidarity we felt then cannot be forgotten. From the team of architect Kenzo Tange we were able to learn complex and team work, with parallel design-modeling (setting in 3D) and making models. As a witness to that period I would say that I learned to be more courageous in discussions, in asking questions, they were my analysis and all this contributed to building my experience. It is difficult for me to conclude that today in the 21st century, in the capital we do not have an Institute of Urban Planning, which with its completion could and should have grown into a scientific institution that will follow and direct the development of the city. At present there is no responsibility for the urban order or chaos.

D:        This period was important for you with the visit to France (1957), London (1960), then the USA, New York, Berkeley, Chicago (together with Lj. Tomić, as a beneficiary of a Ford Foundation scholarship). It must have been a rich experience to travel, to visit such important centers of modernism.

M:        It was exciting, we reminisced about the history of urbanism from textbooks. London left a great impression on me, it was a time of post-war architecture of the modernism, but the sociological aspect was respected, history was respected, the need for space for children, young and old alike was respected, the architecture-man relationship was respected, care was taken of pollution and of cleaning London of smog. The central core of the city was left to develop within the previous framework, but after the war they had to rebuild the ruined London, and the residential construction took place around London, but with standardized gardens, tidy front yards, free sidewalks, simply with urban discipline.

D:        Andreja Damjanov, our old builder, says: “Do not go near the water, the water will destroy your house eventually. Do not go to crumbling soil, nor to the dry one.” What are your main principles in the creative process in architecture?

M:        Le Corbusier was very popular among the guild with its concept, living among greenery, a fusion of greenery and architecture. I admired the theorist and philosopher E. Howard, who imposes the theory of Green Cities, which I had the opportunity to see in the vicinity of London, as examples of applied theory. I come from a large family and we lived in a house (now the Ethnological Museum in Struga) according to a several generations concept building, designed by a French architect before World War I. So the concept of individual housing was mentally close to me. I was fascinated by man-made settlements and urban planners-functionalists (Le Corbusier) who worked under the Athens Charter, whose concept is still relevant today: housing, work, leisure and traffic.

D:        You devoted youself to the Old Bazaar with a lot of love, it is our old core that would have almost been razed to the ground after the earthquake. Even in this period, today, it is undergoing difficult alterations, it is not protected, many policies have changed its face, and it was before your eyes that two of your buildings that were a symbol of the entrance to the Bazaar and a symbol of Macedonian traditional architecture were demolished. The Bazaar is losing its authenticity. What did we do wrong?

M:        Immediately after the earthquake, that part of the city was in danger of being razed to the ground. Bulldozers stood at the entrance to the Bazaar. Owing to the Institute of Urban Planning and architect А. Ciborowski, who took a stand and intervened together with the political authorities, that part, the old core of the city, was rescued. It remained to be reconstructed, revitalized and protected. Thus, for a long period of time we worked with a team of architects on the reconstruction and it was my task and preoccupation for many years. The Bazaar is protected by law, but there is illegal intervention, without respect for tradition, authenticity and cultural heritage, authorship and disregard for the law. It’s a total disrespect for the history of a period. Demolition can make sense if the objects are substandard, and here we have a case of erasing copyrighted works.

D:        We’ve talked before and I remember you telling me with great excitement how you dedicated yourself to the maximum and with great love to the task you were given to reconstruct Suli An. It was razed to the ground in the earthquake. It was a long way to go from foundation to authenticity. Responsible and difficult task. Later, in the 1980ies, when the Faculty of Fine Arts was formed, it was given this inspiring space, a rare opportunity for a faculty.

M:        As a student in Belgrade, I participated in projects for revitalization and documentation of the church of St. Sofia, of old Ohrid architecture, I attended additional classes for reconstruction and revitalization of old buildings. I was assigned a task, a very responsible task for me and a great challenge and I immediately approached the basic documentation, devoted myself to historical analysis, and then to the project preparation. It is a specific inn, I respected the traditional construction, the “Byzantine” bricklaying, which is also used in Islamic architecture. I respected the terrain, the surroundings of the building and I did not sacrifice anything. I’ve been fighting all my life to preserve the authentic, old historical buildings that are characteristic of the city. In 1985, I was invited to present the reconstruction project at the International Conference on Reconstruction, Restoration and Urban Planning of Cities and Buildings in Seismic Regions (under the auspices of UNESCO). 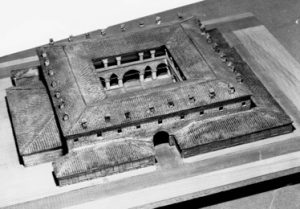