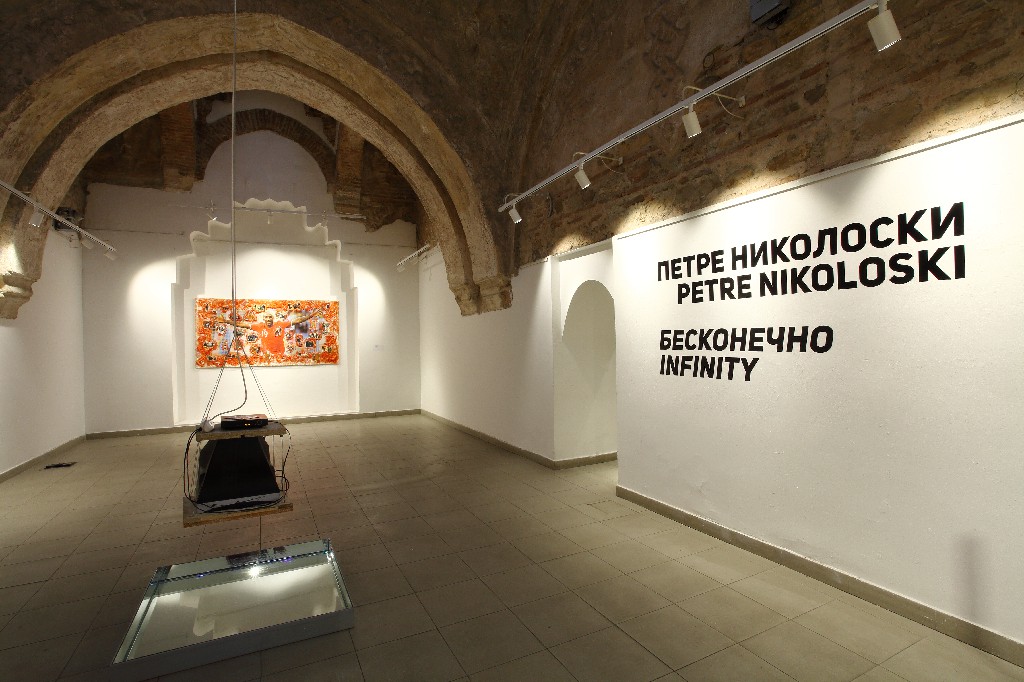 Petre Nikoloski is one of the most prominent Macedonian artists who appeared on the Macedonian visual scene in mid-1990s and who, along with several other authors, his close friends, such as Gligor Stefanov, Ibrahim Bedi, Aneta Svetieva, the ZERO group, Blagoja Manevski, Jovan &#352;umkovski, Stanko Pavleski and others influenced the modernization of the Macedonian figurative art scene and its joining the world trends. After graduating and mastering at the Academy of Fine Arts in Belgrade and after several significant projects and collaborations he accomplished in that period (including the collaboration with Katalin Ladik) – since the late 1980s and early 1990s, for more than 3 decades he’s lived and worked in Britain. In 1994 he, together with Gligor Stefanov, were Macedonia’s first national representatives at the prestigious Venice Biennale. Afterwards, Nikoloski continued working in the domain of liberating art works from their classical qualifications, turning to Arte Povera and creating works with materials found in nature, such as branches, straw, etc. The spatial and visual values ​​of these works correspond to the aesthetic prerogatives of the period, all in the context of degradation, fragmentation, analysis, and yet another characteristic, besides spatiality and otherness, is the fragility of the works due to the processing material. This affects the change of approach and treatment of the sculptural form, whereby a sculpture does not have to have mass and volume, but air and light penetrate directly into it and are of particular importance.

Petre Nikoloski is an author with high creative capacities and abilities, deep contemplation, complexity and aesthetic criteria. His life path was not rosy, as he was rebellious and unsatisfied by nature, in a search for more, for a better future, as well as freedom and disestablishment of expression against which he argued even with his professors and mentors at the Academy. His untameability led him to Britain, where he tried to prove himself in an ocean of which he was only a small drop. It was a laborious and frustrating battle, in which he sometimes emerged as a winner, with laurels, offered projects and favorable conditions, and sometimes as a man who repeatedly starts over and over again. And that battle only strengthened him even more. On the one hand, the free world, full of information, numerous museums, galleries, and works by world-renowned artists, fed him with data, information, knowledge, courage, high standards, and on the other hand, the constant pursuit of one’s own identity, of the self, of one’s own, of the root, of the ground, of the origin, of the institutional slow development, of Macedonian art and of the possibility of it becoming recognizable in the world, were constant discourses to which he returned, about which he wondered and tried to resolve, implement, apply.

This biographical background is probably the reason why his multi-layered work there is constant intertwining of aspects analyzing the feeling of being one’s own, national, but at the same time being a citizen of the world; of discussing multiculturalism and a world without boundaries, divisions and segregations; of returning continuously to nature, to Earth, to the basic living elements and needs, of respecting nature and its laws, and of recalling the fragility of things around us; of opposing the new phenomena that surround us; technologies, life stories, philosophies; of communicating and assisting in the implementation of communication between people, institutions, professions; of initiating the senses and not letting the relationship always be the one defining the things around us without actually seeing, hearing, touching, smelling, tasting…

His latest project has the same features, as well. The “Infinity” project is related to the multidisciplinarity towards which art has been increasingly striving in the last centuries, and this time Nikoloski links it primarily to the literary form and the written word, which from an intellectually-philosophical point of view, have grown into a three-dimensional form transposing the sense of knowledge and thought (which is the essence of the world and progress, and of course of history, nationality and identity). The book as a matrix is the basic segment upon which one of the most essential elements of this project is based, a book with written words from every possible area. The first phase of the project was implemented through a performative piece of altruistic contribution by everyone interested to participate in the creation of the great work. The preliminary part was a period of meeting with the artist and the stage of gathering the material – i.e. creating a kind of portable library from which to build the work further. At these meetings, including public calls through media and social networks, creators or readers and book lovers, publishers, libraries were invited to donate their own or a book they own and which they want to be part of a great art work.

The second phase began after collecting the primary material for modeling the work – enough books that would define much of the installations that made up the “Infinity” project, which was the construction, i.e. the production itself of the work <i>in situ</i> and the construction of most objects that completed the author’s aesthetic and ideal interest. I say <i>in situ</i>, that is, in the premises of the National Gallery of Macedonia itself – the &#268;ifte Hamam facility, since they were, for the most part, especially and exclusively designed in the context of the architectural and ideological-discursive narrative of/behind the &#268;ifte Hamam, as one of the most beautiful objects of Islamic architecture, with its own history and purpose. It is one of the few examples of double hamams in the entire former Ottoman Empire. The nature of this facility in the past and its role as a gallery space from today’s perspective have inspired the author Nikoloski to animate and fill the entire space of the hamam, giving two key focuses, as opposing, but also equilibrating, counterbalances.