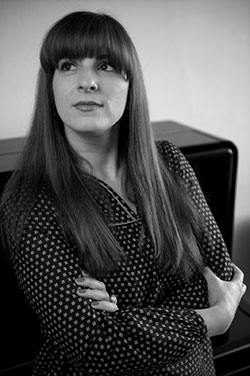 Tina Ivanova (b. 1976, Skopje) has graduated Musicology and Musical Reviews at the Faculty of Musical Arts in Skopje. She works as music journalist in “Utrinski vesnik” since it was founded in 1999. Between 2007-2012, she was the editor of Culture in this daily newspaper.
Before “Utrinski vesnik”, she worked as a show-host in Channel 103 music radio, at the Macedonian Radio within Classical Music program, and as a journalist in the Macedonian Agency of Information.
She has published articles in variety of Macedonian cultural magazines. Tina Ivanova participates on regular basis at the music-scientific event “Struga Musical Autumn”, and is a member of the Union of the Composers of Macedonia. She published the book “Document 103”, a publication on the music radio Chanel 103, for which she was awarded with the prestigious national prize “Mito Hadživasilev-Jasmin” in 2011. In 2013 she published her second book, a novel entitled “Circles”.