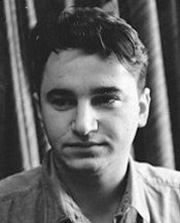 Saško Nasev (1966), writer. Sludied at the Faculty of Philology, department of General and Comparative Literature and at the Faculty of Dramatic Arts, department of Dramaturgy at the University of Skopje. Attended specialization in the United States. Editor of the cultural column of the “Studentski zbor” newspaper and associate of the Macedonian National Television. One of the most productive young Macedonian writers: play Trilogy (1987), novel Božilak Nikogov (1990), play Purification (performed in the “Jordan Hadži Konstantinov – Džinot” National Theatre in Veles, 1990), play Who do you belong to (performed in the Skopje Drama Theatre; published by Youth Center, Skopje 1991; published also in Serbo-Croatian in the magazine “Scena”, Novi Sad 1991), play Sin or Spritzer (performed in the Skopje Drama Theatre, published by “Magazine 21”, Skopje 1992), farce Czar Spiro (performed at the Young Open Theatre Festival (MOT) in Skopje, 1992), dramatization Female Orchestra I and II (1991, 1992), play Libretto Wagner (performed at the National Theatre in Bitola, 1993), TV serial Chubbies (Macedonian Television, 1994), play Harem (in preparation at the Skopje Drama Theatre). Author of a film scenario being prepared for shooting. One of the authors of the book “La jeune Macédoine” (1993) which contains texts from young leading Macedonian intellectuals. The plays Who do you belong to, Sin or Spritzer and Female Orchestra I and II performed over several hundred times all over Macedonia achieved great success.