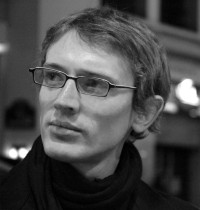 Owen Martell was born in 1976 and grew up in Pontneddfechan, south Wales. His first Welsh‐language novel, Cadw dyffydd, brawd, written while a student at Aberystwyth, won the Arts Council of Wales’ Welsh Book of the Year award in 2001. His second novel, Dyn yr Eiliad (The Other Man), was short‐listed for the same prize in 2004 and, according to one reviewer, is “a landmark in recent Welsh fiction”. His most recent book is Dolenni Hud, a collection of six short stories set in “Welsh” towns in the United States, produced in collaboration with photographer Simon Proffitt and accompanied by Cymru Arall / Parallel Wales, an installation shown at The LAB in San Francisco in 2008. Owen Martell works also as a translator. His adaptation of Martin Crimp’s Attempts on Her Life will be produced by the Sherman Cymru theatre, Cardiff, in summer/autumn 2009.