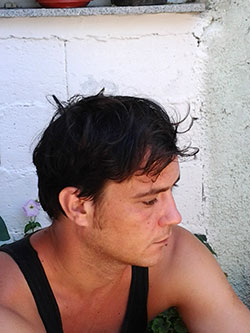 Marko Tomaš was born in Ljubljana in 1978.
He went to elementary school in Mostar and Kljajićevo. Graduated from high school in Sombor.
Оne of the founders and editors of the magazine Kolaps and its accompanying library.

He has published articles in the Bosnian-Herzegovinian newspaper Dani, Glas Istre and Feral Tribune.
He ran the famed bookstore Utopia in Split.
He is a journalist for the news portal zurnal.info.
He has published prose and poetry in journals in Bosnia and Herzegovina, Croatia and Serbia.
His poems have been translated into Italian, Polish, German, Macedonian, and English.
He has lived, studied and worked in Sarajevo, Zagreb and Split. He currently lives and works in Mostar.