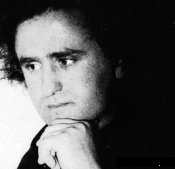 poet, playwright. Born 29th October 1953 in the village of Sloeshtica, Demir Hisar. Graduated from the Faculty of Philology in Skopje, where he gained his M.A. Degree with the thesis “Macedonian Folk Drama”. From 1985-1988 worked at the Institute of Macedonian Literature at the Faculty of Philology “Blaze Koneski” in Skopje. From 1980-1985 was editor with the publishing house “Misla”. He taught creative writing at many European and American universities (Institute for Oriental Languages and Civilisations in Paris, University of Texas-Dallas, University of Yale and University of Orse in Paris). Currently Ambassador of Republic of Macedonia to France. Member of the Macedonian P.E.N. Centre. Member of the Macedonian Writers’ Association.

Awards include: “Studentski zbor”, an award at the 23rd Theatre Festival (MESS) in Sarajevo for best drama text, an extraordinary award at the Sterino pozorje and other international literary prizes.