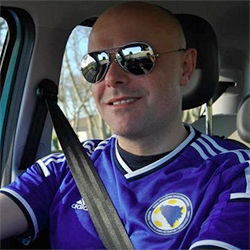 Jon Blackwood is a curator, lecturer and writer specializing in contemporary art. He has a particular interest in contemporary art in the Western Balkans, having lived both in Sarajevo and Skopje from 2011-14. Now based in NE Scotland, he continues to divide his time between Scotland and the former Yugoslavia.
He has curated exhibitions in Cetinje, London, Sarajevo, Skopje, Zagreb, Tallinn, Aberdeen and Edinburgh, and has experience of working with performance, installation, sound, video and relational art, in addition to more traditional media- painting and sculpture.
Jon has published six books, and numerous articles. Most recently he has published Introduction to Contemporary Art in Bosnia-Herzegovina (duplex 100m2, Sarajevo, 2015) and Critical Art in Contemporary Macedonia (Mala galerija, Skopje, 2016). His next exhibition will be a show of six contemporary Macedonian artists at Summerhall, Edinburgh in October 2017.
Having taught at various universities in the UK and in Bosnia-Herzegovina, Jon is now a lecturer in Critical and Contextual Studies at Gray’s School of Art, Robert Gordon University, Aberdeen.