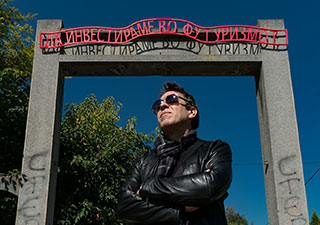 IGOR TOSHEVSKI was born in 1963 in Skopje. He graduated printmaking at the Academy of Fine Arts in Helsinki, Finland, in 19 He holds a Masters degree in sculpture (2011) at the Faculty of Fine Arts in Skopje. In 1980, he partakes in the founding and operation of several art groups in Macedonia, including the group Zero (1985-1990), playing a significant role in the emergence and development of the alternative art scene in Macedonia. As one of the founding members of the initiative Kooperacija (2012-2015) he actively participates in the conceptualization and implementation of numerous events, including group exhibitions, collaborative projects, workshops, presentations and panel discussions held in the country and abroad.
In his creative opus, through numerous actions, interventions, installations and long-term projects based on conceptual and multimedia recontextualizations, Toshevski explores the complex relationship between art and its role in a radical social and political context. His works address issues of positions of power, propaganda, censorship, the abuse of public space, the institutional framework and bureaucratization, relations between the visible and the obscured, and the dialectical relationship between freedom and restrictions.