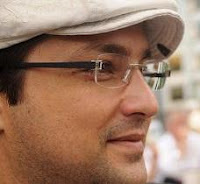 Gökçenur Çelebioğlu was born in Istanbul in 1971 and spent his childhood in a number of Turkish cities. He graduated Istanbul Technical Univercity Electrical Engineering Faculty and has a Master’s degree in Business Administration from Istanbul University.
He started publishing his poems in Turkish magazines since 1990 and his first collection Handbook of Every Book came out in 2006 and second one Rest of the Words in 2010. Both books are published by Yitik Ülke (Lost Land) Publishing House. His third book The Only Way of Looking at Thirteen Blackbirds at Once is published by I Libri Del Merlo publishing house in 2011, in Italy. His fourth book which contains his selected poems U svetu smo mi, u svetu su reči, ovde je sve tako savršeno (We are in the World So Are Words, How Nice Everyone’s Here) is published by Treći Trg Publishing House, in 2012 in Serbia . Same year his fifth book With So Many Words On Your Back is published by Yitik Ülke (Lost Land) Publishing House.
He has attended several poetry and translation workshops and festivals in Riga, Vilnius, Istanbul, Athens, Tel-Aviv, Belgrade, Lodeve, Sofia, Zagreb and Cunda. His poems have been translated to English, German, French, Greek, Bulgarian, Swedish, Portuguese, Japanese, Romanian, Latvian, Lithuanian, Macedonian, Serbian, Croatian, Occitane and Hebrew and published in literary magazines.
He has translated Wallace Stevens, Paul Auster and a modern Japanese haiku anthology into Turkish, and is currently preparing an anthology of modern American poetry.
He is the prime mover and co-director of Word Express (www.word-express.org)
His pen name is Gökçenur Ç.