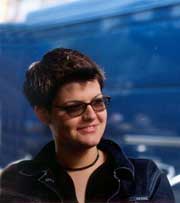 Ana Stojanoska, Ph.D. (1977) Theatrologist, Assistant at the Faculty of Dramatic Arts for the course Macedonian Drama and Theatre. Received her M.A. in Theatrology from the Faculty of Dramatic Arts in 2003 with her M.A. thesis Macedonian Postmodern Theatre, and she received her Ph.D. dissertation Realistic Poetics and Aesthetics at Dimitar Kjoistarov`s Directing (2007). She has worked as researcher/coordinator at the Institute of Theatrology at the Faculty of Dramatic Arts since 2002. Ana Stojanoska writes short stories and has published articles and essays in Macedonian periodicals. She has participated in several symposiums and workshops in Theatrology. She is author of a book – Macedonian Postmodern Theatre She is also the editor of Drami, the collection of plays by Dejan Dukovski and one of the authors and editor of the chapter Fakti in the monographs Ilija Milčin (edited by Jelena Lužina, 2003) and Petre Prličko (edited by Jelena Lužina, 2005).